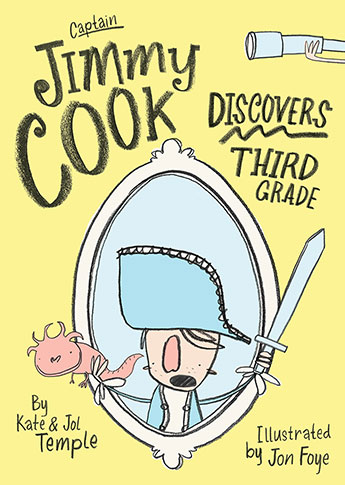 Jimmy Cook is finding History Week a bit boring until Ms Fennel starts banging on about Captain Cook. Then - bingo! Turns out he and Captain Cook have a lot in common. Here are three of the big ones: they are both named James Cook; they are both great explorers; and they both look great in a tricorn hat. Funny fiction for those who love Tom Gates and Timmy Failure.

Jimmy Cook has discovered that he has quite a lot in common with the explorer Captain James Cook. No doubt they were related. So when he finds out that Captain Cook met with a sticky end in Hawaii, he's determined to travel to the island to finish what he started. His parents aren't so interested but luckily Jimmy's favourite brand of cereal is running a competition. First prize: a Hawaiian Holiday.

Jimmy is going to have to eat a lot of full-fibre Wheetblocks to enter, but big dreams come with a big price. And no price is too big when it comes to Captain James Cook especially if it means beating the world's most annoying person, Alice Toolie.
More books by this author

Kate and Jol have written five children's books including Parrot Carrot, I Got This Hat and Mike I Don't Like. These books have found themselves on the NSW Premier's Reading Lists a number of shortlists and MIKE was even awarded Best Designed Children's Book in Australia by the Australian Publishers' Association. I Got This Hat was recently announced as 2016 National Storytime Book.

They have also been the recipients of Australia Council grants to create digital adaptions of their books. Parrot Carrot's digital companion won Creative Show Case and was shortlisted at a number of national and international award shows. It also reached number 2 on iTunes.

Kate and Jol have presented at the Byron Bay Writer's festival for the past three years and have been invited to the Adelaide Festival for 2016. When they are not writing books they love to get out and talk to schools and read to library groups.