The Wicked King (The Folk of the Air #2) 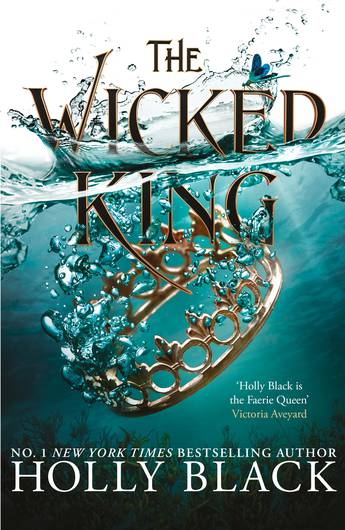 The second book in the thrilling new fantasy series from bestselling author Holly Black about a mortal girl who finds herself caught in a dangerous web of royal faerie intrigue.

The enchanting and bloodthirsty sequel to the New York Times bestselling novel The Cruel Prince.

The first lesson is to make yourself strong.

After the jaw-dropping revelation that Oak is the heir to Faerie, Jude must keep her younger brother safe. To do so, she has bound the wicked king, Cardan, to her, and made herself the power behind the throne. Navigating the constantly shifting political alliances of Faerie would be difficult enough if Cardan were easy to control. But he does everything in his power to humiliate and undermine her, even as his fascination with her remains undiminished.

When it becomes all too clear that someone close to Jude means to betray her, threatening her own life and the lives of everyone she loves, Jude must uncover the traitor and fight her own complicated feelings for Cardan to maintain control as a mortal in a Faerie world.

Dramatic and thrilling fantasy blends with contemporary storytelling to create a fully realised world, filled with magic, politics and treachery.
More books by this author

Holly Black is the author of bestselling contemporary fantasy books for kids and teens. Some of her titles include The Spiderwick Chronicles (with Tony DiTerlizzi), The Modern Faerie Tale series, the Curse Workers series, Doll Bones, The Coldest Girl in Coldtown, the Magisterium series (with Cassandra Clare), The Darkest Part of the Forest, and her new series which begins with The Cruel Prince in 2018.

She has been a a finalist for an Eisner Award, and the recipient of the Andre Norton Award, the Mythopoeic Award and a Newbery Honor. She currently lives in New England with her husband and son in a house with a secret door. Follow Holly at www.blackholly.com or on Twitter: @HollyBlack

The Wicked King by Holly Bl... by on Scribd