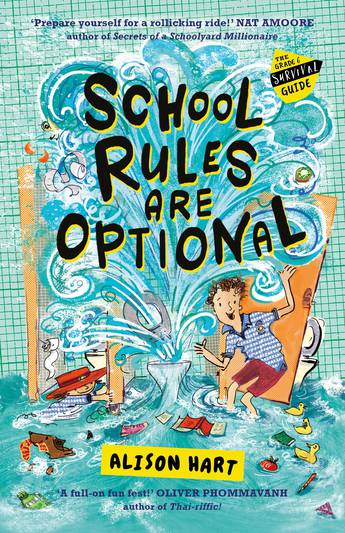 Jesse is in his final year of primary school and should be living it up as one of the 'Kings', but he can't even get his Prep buddy to follow school rules. A hilarious story of being undervalued and over everything for fans of Diary of a Wimpy Kid and Secrets of a Schoolyard Millionaire.

It's the first day of school and I've already got three problems:
1) Mrs Leeman is my classroom teacher. She's so ancient she taught my dad.
2) I might have accidentally been voted school captain. I had an unusually popular day when the class voted last year.
3) Somehow I've lost my Grade Six jumper between receiving it and Mrs Leeman's lecture about being responsible.

That's a lot to go wrong in half an hour. On top of that, it's a million degrees. So that's four problems. It's worse than I thought! At least things can only get better, right?

Jesse will have you roaring with laughter as he navigates the rites and rituals of Grade Six including a disrespectful Prep buddy, a plumbing problem the size of Niagara Falls, not to mention the dreaded compulsory school camp.

'Prepare yourself for a rollicking ride!' Nat Amoore, author of Secrets of a Schoolyard Millionaire

Alison Hart lives at the foothills of the Dandenong Ranges with her daughter and lots of animals, wild and domestic. The house block is so steep, you have to go down two sets of steps to get to the front door. It's nice and quiet for writing, but also a bit distracting because the view is really good. In her spare time, Alison likes reading, watching old movies, and opening and closing the door for the cat. Besides writing, Alison works in community aged care. School Rules Are Optional is her first novel.