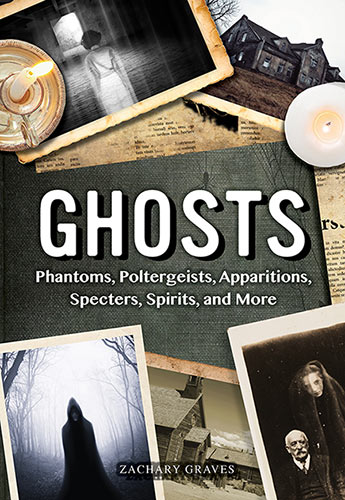 Ghosts investigates our continued obsession with visitors from the other side, and establishes once and for all where the horror begins—and ends.

Ghosts traces the cultural and literary origins of the paranormal, reveals the secrets behind many mysterious myths and legends, and analyzes our continued fascination with visitors from the other side. With chapters on the origins of ghosts, poltergeists, ghosts from around the world, exorcism, haunted houses, and more, this book will keep you on the edge of your seat. Belief in ghosts is nothing new. Uncertainty surrounding death is part of the human condition and the existence of an afterlife is deeply rooted in most worldwide cultures and religions. In Taoism and Buddhism, the Hungry Ghost Festival celebrates the belief that, once a year, ghosts and spirits are released from the afterlife and walk among the living. In the west, ghost stories were established in ancient folklore and tend to embrace the same classic themes as todays horror movies: romance, tragedy, and terror. Writers of antiquity used ghosts and hauntings as a way to provide background information or foretell coming events, and Shakespeare, the father of English literature, used the same techniques in his plays. Glamis Castle, the infamous haunted Scottish setting for Shakespeares Macbeth, is said to be on of the most nerve-wracking places on earth—but are these feelings imagined or real? At one time or another, most people have experienced a creepy, spine tingling, someones watching you sort of sensation that they cant explain. Scientists may try to account for these fears by attributing them to the natural fear of the unknown. Cold spots are nothing more than an open window and creaking floorboards are nothing more than old wood shifting in place. Regardless, millions of people believe that there is much more to these strange phenomenons than can be explained by modern science. And really, who can say that theyre wrong? Be informed, entertained, and frightened by this comprehensive volume about "the other side."
More books by this author More books in this series

Zachary Graves is a writer who specializes in the occult. He grew up in Baton Rouge, Louisiana, USA where he  developed an early interest in voodoo, and later, as a student of cultural history, made several research trips to Haiti to further his interest. He has travelled widely, particularly in Africa and the Far East, where he lived for some time. He currently resides in New Orleans, close to the St Louis Cemetery, where Marie Lavaux, the voodoo queen of New Orleans, is buried.